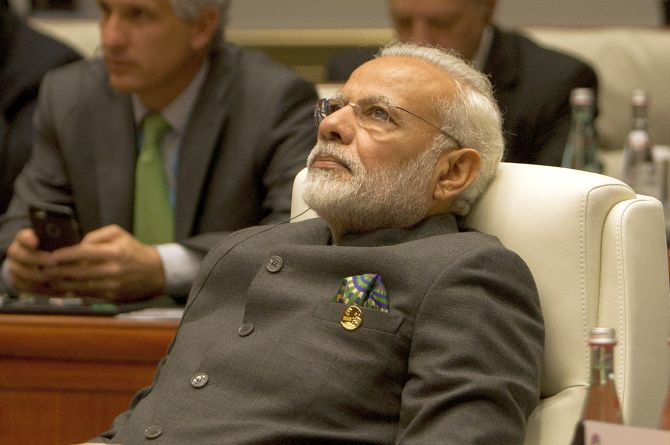 The Congress today said Prime Minister Narendra Modi's announcement to observe a day-long fast on Thursday to protest the washout of the budget session of Parliament was a "farce", adding that the PM should instead apologise to the youth, Dalits and other sections of the society, who were allegedly let down by his government.
Congress communications in-charge Randeep Singh Surjewala also said the BJP-led central government should be blamed for the Parliament washout, despite enjoying an absolute majority in the Lok Sabha.
"This is a farce of a fast by the Modi government. The BJP should apologise to the nation and hold a fast for disrupting Parliament for over 250 hours. The Lok Sabha, where the BJP has a majority, functioned for only one per cent of its time and the Rajya Sabha functioned for six per cent of its time," he told reporters in New Delhi.
Surjewala also alleged that the government had "disrespected" and "degenerated" Parliament.
Holding the government responsible for the CBSE papers leak and the alleged dilution of the SC/ST (Prevention of Atrocities) Act, the Congress spokesperson said the prime minister should "hold a fast to apologise to the country for the 13 banking scams, where people like chhota Modi that is Nirav Modi and Mehul Choksi ran away with over Rs 61,000 crore".
He added that the BJP should also apologise to the country for not revealing the details of the Rafale deal and thereby, compromising on issues of national security.
The Congress' reaction came after the BJP announced that the prime minister would observe a day-long fast on Thursday, along with the party MPs, to protest the recent washout of the Budget Session of Parliament, while party chief Amit Shah would hold a sit-in at Hubli in poll-bound Karnataka on the same day. -- PTI
« Back to LIVE