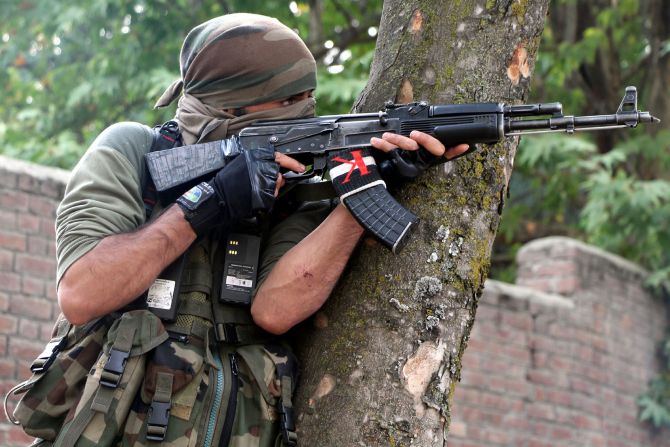 Two jawans were killed in heavy mortar shelling and firing by Pakistani troops along the LoC in Rajouri district of Jammu and Kashmir, officials said.
"Pakistan army initiated unprovoked and indiscriminate firing of small arms, automatics and mortars from 1715 hours in Sunderbani sector along the Line of Control last night," a defence spokesman said.
The Indian Army was giving a befitting reply, he said.
Rifleman Vinod Singh and Rifleman Jaki Sharma were grievously injured in the firing and later succumbed to their injuries, the spokesman said.
Singh, 24, belonged to Danapur village of Akhnoor district in Jammu and Kashmir. He is survived by his father, Ajit Singh.
Sharma, 30, was from Sanhail village of Hiranagar district in Jammu. He is survived by his wife, Rajni Devi.
"Rifleman Vinod Singh and Rifleman Jaki Sharma were brave and sincere soldiers. The nation will always remain indebted to the brave hearts for their supreme sacrifice and devotion to duty," the defence spokesperson said.
-- PTI
« Back to LIVE