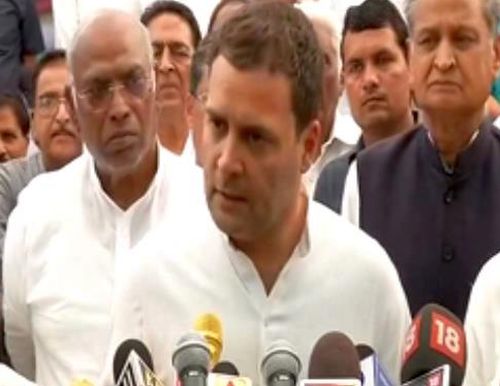 Congress president Rahul Gandhi on Monday led his party in a nationwide daylong fast against caste violence, communalism and the non-functioning of Parliament for which the party blames the ruling Bharatiya Janata Party.
Speaking to the media, the Congress president took aim at Prime Minister Narendra Modi, saying, "The PM is an anti-Dalit person. He has no place in his heart for the Dalits. We stand against the government's ideology."
Rahul also exuded confidence, saying that the Congress would defeat the BJP in 2019.
The Congress day-long fast came under fire earlier in the day when the BJP posted an image of Congress leaders -- AS Lovely, Ajay Maken, Haroon Yusuf -- enjoying a meal of chhole bature on a day the party has called a fast to protest policies of the government and the derailed budget session of Parliament.
« Back to LIVE