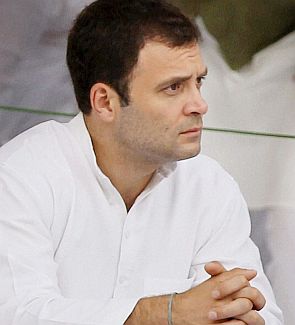 Congress president Rahul Gandhi will lead a protest at the Raj Ghat in Delhi on Monday as part of a nationwide "fast" of the party to protest against the Narendra Modi government and non-functioning of Parliament.
Congress workers will hold a day-long fast at all state and district headquarters to protest against the BJP government and promote communal harmony and peace across the country.
In the national capital, Gandhi will sit with Delhi Congress chief Ajay Maken and party workers to protest against the government and its failure to hold discussion in Parliament on key issues such as the CBSE paper leak, the multi-crore PNB scam, Cauvery issue and Special Category Status to Andhra Pradesh.
The Congress will also take up issues related to alleged dilution of the SC/ST Act, farm distress and disillusionment among the youth. The BJP has also announced that its MPs will observe a fast on April 12 to protest the impasse in Parliament.
Newly appointed All India Congress Committee in-charge for Bihar Shaktisinh Gohil on Sunday said that party would stage the fast on Monday in the state to expose BJP's "lies and cheating".
The Congress' Maharashtra unit will observe a token fast on Monday to protest against the "vicious stand" of the BJP government that has "threatened harmony in society", the party's state chief Ashok Chavan today said.
"BJP government's vicious stand has threatened the harmony in the society across the country. To maintain it, Congress leaders will observe token fast at party's respective district head quarters across the state. I will personally observe fast in Parbhani district" he tweeted on Sunday.
« Back to LIVE