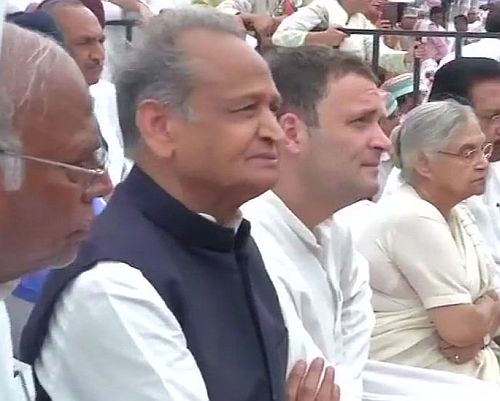 Congress president Rahul Gandhi and senior party leaders are on a day-long, nationwide hunger strike at Rajghat in New Delhi today to protest against the Narendra Modi government and the derailment of the budget session of Parliament, which ended last week. With party president Rahul Gandhi were Sheila Dixit, Ashok Gehlot, and Mallikarjun Kharge, Ajay Maken, Kamal Nath, P C Chacko, Randeep Surjewala among others.


Party leaders Sajjan Kumar and Jagdish Tytler, both accused in the 1984 anti-Sikh riots, were asked to not sit on the main stage at the protest venue when Gandhi was about to arrive, party leaders said.


Kumar left the venue immediately after he was told about it. Surjewala was quick to hit out at the BJP over the controversy. "Some conspirators in BJP see meaning in everything,' he added. Tytler and Kumar are charged with having a role in the riots in the aftermath of prime minister Indira Gandhi's assassination by her Sikh bodyguards on October 31, 1984.


The Congress hunger strike is also in protest against the Centre's failure to allow a discussion on issues like the CBSE paper leak, the PNB scam, the Cauvery water issue, Special Category Status to Andhra Pradesh, the dilution of the SC/ST Act and farm distress.The BJP has released a video to counter Rahul Gandhi's fast, saying 'Rahul Gandhi may choose to go on fast but should refrain from spreading falsehoods.'
« Back to LIVE