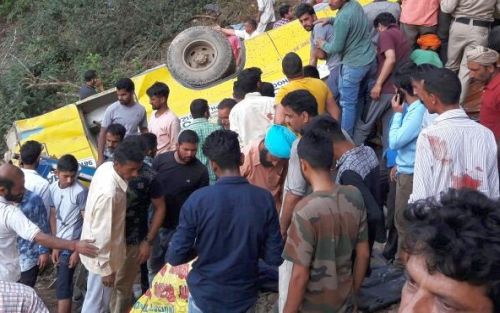 Thirty people, including 27 children, were killed when the school bus they were travelling in fell into a deep gorge in Himachal Pradesh's Kangra district, news agency ANI reported.
The bus belonging to a private school overturned as it slipped into the gorge and came to rest in the middle of the hillside, the rescuers said.
A team of the National Disaster Response Force have reached the accident site at Kangra's Nurpur town, 220 kilometres from state capital Shimla.
Rescue operation is on.
Himachal Pradesh Chief Minister Jairam Thakur has announced Rs 5 lakhs compensation for the families of the victims.
« Back to LIVE