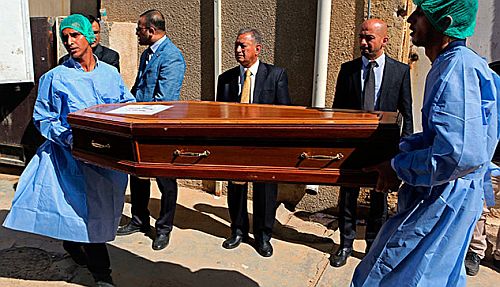 The special flight carrying the mortal remains of the 38 Indians killed in Iraq's Mosul, lands in Amritsar. MoS MEA VK Singh who was on the flight back, when asked whether the kin of the Indians killed would be given jobs, said, "This is not a game of football. Both the state and central governments are sensitive. The External Affairs Minister Sushma Swaraj had asked the families for the details of their members who can be given jobs etc. The government will review it."


On Sunday, Singh left India, with a special flight to bring back the mortal remains of the Indians. 27 of the 38 bodies will be deboarded in Amritsar and will be sent to their respective homes, and the rest of the coffins will be sent to Patna.


The militants initially abducted 40 workers. One managed to escape, while the presumed remains of another have yet to be positively identified. Authorities are awaiting DNA samples from a relative.


Image: MoS VK Singh oversees a coffin, containing the body of one of the 38 Indians killed by ISIS in Iraq, being loaded on to a vehicle in Iraq.
« Back to LIVE
Business emailOffice email AppDomain registrationWebsiteRediffmailMoneyCompany emailOnline ShoppingBooksGiftsVideosBlogsBuzz