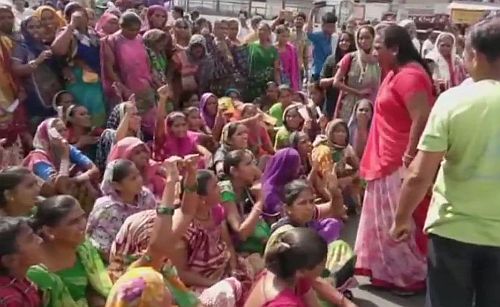 The Supreme Court has declined an urgent hearing of the review of the SC/ST Act.  The Centre today had filed a review petition in the Supreme Court against its order that there would be no automatic arrest on any complaint filed under the SC/ST (Prevention of Atrocities) Act.

As Dalit organisations called for protests and a Bharat bandh, this is what it looks like now.


Gwalior: 19 people injured in Gwalior of which 2 are in critical condition. Internet services have been blocked in Gwalior district till 6 am tomorrow.


Morena: One person has died in Morena, curfew imposed in the area.


Jaipur: Nearly 30 people were detained as Dalit groups protesting against the Supreme Court order on the SC/ST Act today blocked rail and road traffic and vandalised public property, including a train, in several parts of Rajasthan, disrupting normal life in the state.
Protestors gathered at major roads in the state capital lead to traffic snarls, while incidents of stone pelting and damage to public property were also reported, police said.


Odisha: Normal life was partially affected in several parts of Odisha today as dalit outfits staged protests and strike as part of a countrywide agitation against the Supreme Court order on the SC/ST  Act. Vehicular movement was affected in several areas including Jharsuguda, Sundargarh, Malkangiri, Sambalpur and other tribal-dominated districts,  police said. Buses also remained off the roads in Biramitrapur, Malkangiri, Kalahandi and Bolangir.


Delhi: Traffic came to a standstill in Lutyens' Delhi today as hundreds of protesters marched in unity   against the dilution of the SC/ST Act.
The protesters gathered at Mandi House protesting the Supreme Court order banning automatic arrest and registration of cases for alleged harassment of Scheduled Castes and Scheduled Tribes.
They blocked road outside the Mandi House Metro Station, bringing traffic to a halt as commuters faced inconvenience while travelling towards ITO and other stretches.
« Back to LIVE
Business emailOffice email AppDomain registrationWebsiteRediffmailMoneyCompany emailOnline ShoppingBooksGiftsVideosBlogsBuzz