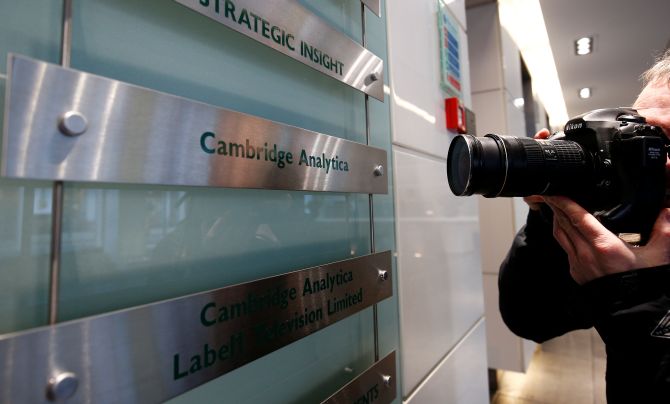 Cambridge Analytica -- the firm at the centre of Facebook users' data breach -- has sought an additional time of one week to respond to government's notice questioning the company on alleged misuse of data to profile Indians and influence their voting behaviour.
The IT ministry had, last month, shot off notices to social media giant Facebook as well as Cambridge Analytica on the data breach issue and the deadline for the British data analytics firm to respond to the notice was March 31. Facebook has time till April 7 to send its detailed reply on the matter.
A source said that Cambridge Analytica has sought additional time of one week to respond to the government notice.
The notice had sought the company's response on the entities which engaged Cambridge Analytica, the method used by it for possession of data and whether consent was taken from users.
"The Ministry of Electronics & Information Technology, Government of India, has issued a notice... to Cambridge Analytica, wherein the serious breach of propriety and misuse of data intended to profile and influence voting behaviour has been highlighted," the IT ministry had said in a statement last month.
"Was there any profiling done on the basis of such data?," the ministry had sought to know from the company.
Law and IT Minster Ravi Shankar Prasad had previously warned social media giant Facebook of "stringent" action for any attempt to influence polls through data theft and had even threatened to summon its CEO Mark Zuckerberg, if needed.
-- PTI
« Back to LIVE