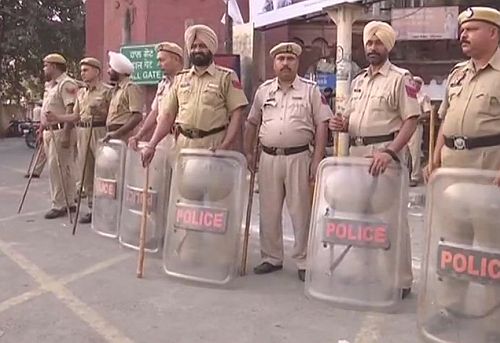 In the wake of the 'Bharat Bandh' called by several Dalit organisations, Punjab Chief Minister Amarinder Singh has appealed to protesters to ensure that mortal remains of the Iraq victims, that are expected to arrive in Amritsar tomorrow, are allowed to be transported to their villages without any impediment. He also directed the state police to provide strict security for the same.


On March 20, External Affairs Minister Sushma Swaraj informed the Rajya Sabha members in the Parliament that all 39 Indian nationals, who went missing in Mosul in 2014, were killed by the terror outfit Islamic State.


The 39 persons, most of whom hailed from Punjab, were working on projects near Mosul when they were kidnapped.


On a related note, the Punjab police also made it clear to the protestors that a strict action will be taken against those who indulge in violence on April 2 across the state.


The Commissioner of Police in Ludhiana said, "4000 police personnel along with one company of Rapid Action Force to be deployed tomorrow. Strict action will be taken against those who indulge in violence."


Dalit organisations have called for a countrywide bandh on April 2 to protest the Supreme Court's verdict on March 20 that protects public servants from arbitrary arrests under the Act.


On March 20, the apex court, in a bid to check misuse of the SC/ST Act, ruled that preliminary enquiry in a case under the Atrocities Act would be done by the DSP to ensure the allegations are not frivolous, and to avoid the false implication of an innocent.


The court also held that a government official cannot be prosecuted on a mere allegation of committing an offense under the Act without the sanction of the appointing authority. -- PTI


Image: Police bandobast in Amritsar.
« Back to LIVE