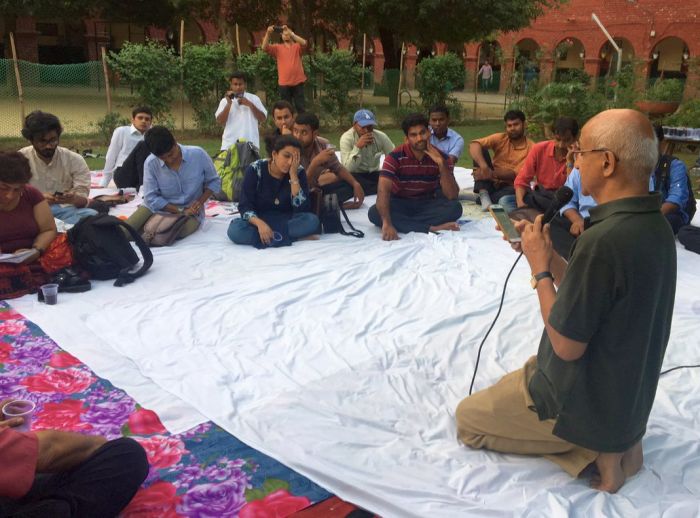 The Centre for Equity Studies, run by former IAS officer Harsh Mander, has been served an income tax notice for 'complete scrutiny' of its returns.


The institute received a notice under Section 143 (2) of the Income Tax Act for scrutiny of its I-T returns for the assessment year 2016-17 on September 20.


Mander is currently visiting various states where lynchings have taken place in recent months as part of the initiative, Karwan-e-Mohabbat or the caravan of love -- which he has described as a journey of love, atonement and solidarity. Mander took to Twitter to state that there was a link between the I-T notice and his run-in with Rashtriya Swayamsevak Sangh ideologue Rakesh Sinha on national TV recently.


Image: Harsh Mander interacting with the public in Delhi during his Karwan-e-Mohabbat yatra, as part of which he covered Assam, Jharkhand, Karnataka, Delhi, Western UP, Haryana, Rajasthan and Gujarat.
« Back to LIVE

Deserted streets, limited customers, no revenue generation, huge rentals and restricted operations have forced many outlets to put their shutters down permanently while many others are struggling to survive by retrenching staff and...

The resolution, drafted by France and Tunisia, 'demands a general and immediate cessation of hostilities in all situations on its agenda and supports the efforts undertaken by the Secretary-General and his Special Representatives and...

In Pictures - Richa-Ali as bride and groom

The actors featured in a pre-wedding shoot for Brides Today magazine.

Individual orders were issued to all blacklisted Tablighis: Govt to SC

As per the information available, 205 first information reports have been lodged against the foreign Tablighi Jamaat members by 11 states and 2,765 such foreigners have been blacklisted so far, while visas of 2,679 foreigners (including...