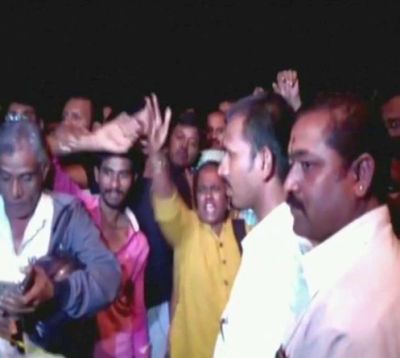 Protests are being held outside senior journalist Gauri Lankesh's residence in Bengaluru's Rajarajeshwari Nagar after she was shot dead this evening.
Several protests are also being planned in Delhi and Bengaluru tomorrow.
Karnataka police chief R K Dutta said Lankesh was shot dead by unidentified assailants at the entrance of her residence.
Her brother Indrajit demanded that the case be handed over to the Central Bureau of Investigation, India Today reported.
Chief Minister Siddaramaiah condemned her murder and described it as an assassination of democracy. Absolutely shocked to learn about the murder of renowned journalist Gauri Lankesh," Siddaramaiah tweeted.
"I have no words to condemn this heinous crime. In her passing, Karnataka has lost a strong progressive voice, and I have lost a friend," the chief minister said.
Lankesh was the daughter of journalist and writer P Lankesh.
In November 2016, Lankesh was convicted in two separate defamation cases for her article from January 2008 criticising leaders from the Bharatiya Janata Party. She was out on bail in the case.
« Back to LIVE