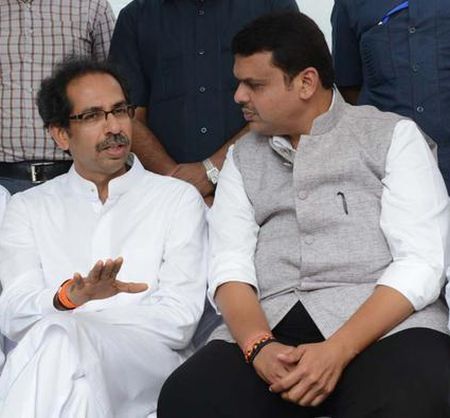 Maharashtra Chief Minister Devendra Fadnavis today said that the Shiv Sena must realise that it cannot play the role of a ruling party and opposition simultaneously.
His comments came as the Bharatiya Janata Party-Sena coalition government completes its three years in office on Tuesday.
"Some Sena leaders have developed the habit of opposing everything our government does... One can understand opposition to a few things as they are a different party," Fadnavis said.
"How is it alright if you oppose everything? How can it be that you are in government and opposition at the same time? People do not like this," the chief minister said during an interaction at his official residence in south Mumbai.
Due to such statements by some (Sena) leaders, neither they nor their party benefits, Fadnavis, who was sworn in as chief minister on October 31, 2014, said.
"While being part of the government, if you want to take credit, you should also learn to take discredit ... It cannot happen that you claim credit and give discredit to others," the chief minister said.
"You should be able to tolerate criticism for a (government) decision. You cannot say you did all the good and the BJP did all that is not good," he said.
Asked about reports of some Sena leaders threatening to withdraw from the state government, Fadnavis said, "What is there to react? I will react openly if Uddhavji (Sena president Uddhav Thackeray) says something."
"There (in the Sena) are many who think they are very big leaders. We do not react to such leaders. From our side, leaders of their level react to what they say," Fadnavis said.
He denied reports about Milind Narvekar, an aide of Uddhav Thackeray, giving an him an "ultimatum" against inducting former Sena leader Narayan Rane in the state cabinet.
On the coalition, he said: "This will continue. There is not this much of tension (between the BJP and the Sena). The tension is seen (from) outside but inside there is no tension," he said. -- PTI
« Back to LIVE