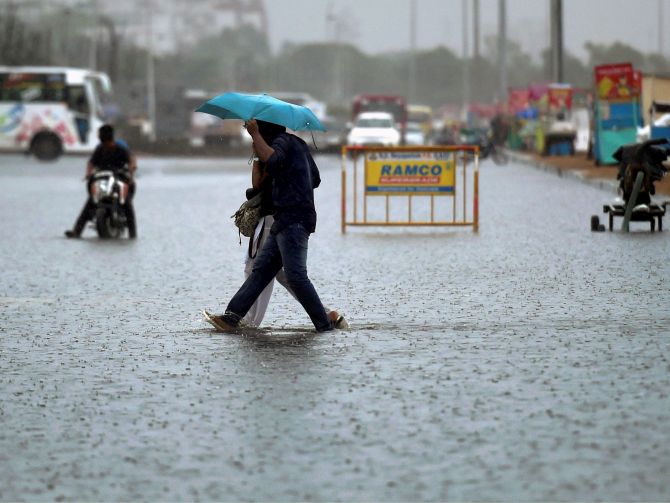 Rains lashed several parts of Tamil Nadu on Monday, partially disrupting normal life in some areas and claiming one life in Thanjavur district.
Though the showers, the first big spell after the North East Monsoon set in over the state last week, brought cheers in several parts hit by water scarcity, they also caused traffic snarls and inundation.
Several schools in Chennai closed ahead of schedule as the city experienced heavy showers.
A 38-year-old man died when a mud wall of his hut collapsed in Thinnaiyoor near Thanjavur district's Orathanadu which experienced heavy rains, police said.
The intermittent rains, under the influence of an upper air cyclonic circulation over South West Bay of Bengal, began last night in parts of the state, and intensified this morning.
The Met office forecast heavy to very heavy rains in some areas of coastal districts, including the capital city and its neighbourhood, in the next 24 hours.
"The upper air cyclonic circulation over Southwest Bay of Bengal near Sri Lanka yesterday continues to be positioned in the same region," Director of Area Cyclone Warning Centre here S Balachandran told reporters.
Due to this, coastal districts and many places in interior districts were likely to witness moderate showers in the next 24 hours, he said.
Some areas in coastal districts of Chennai, Kancheepuram, Tiruvallur, Cuddalore, Nagapattinam, and Ramanathapuram might experience heavy and very heavy rains as well, he added.
Traffic in Chennai came to a grinding halt in several locations like the arterial GST Road and Anna Salai, affecting traffic bound for airport and other outskirt areas. -- PTI
Image: A couple crosses the waterlogged service road near the Marina beach during heavy downpour in Chennai on Monday. Photograph: PTI Photo
« Back to LIVE