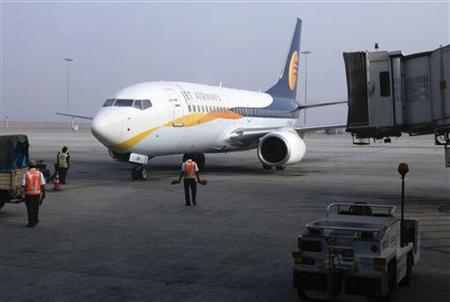 The Ahmedabad police has detained a passenger of a Mumbai-Delhi Jet Airways flight which was forced to make an emergency landing at the Ahmedabad airport today after a note stating that there were hijackers and a bomb on board was found in the washroom, a police officer said.


The passenger, identified as Birju Prasad Salla, a jeweller hailing from Rajula town in Gujarat's Amreli district, was taken into custody based on suspicion after the plane landed in Ahmedabad, he said.


Salla, who now lives in Mumbai, had in the past too done such a mischief with the airline out of some grudge, the police official said.


"Salla wrote in Urdu and got the translation from Google. He had problem with Jet on food so he planned this. We have found a letter in English and Urdu. Investigation is on, only then we can report the motive," Deepan Bhadran, DCP Crime said.


Earlier, Union Civil Aviation Minister Ashok Gajapathi Raju said the person responsible for the security threat on the Mumbai-Delhi Jet Airways flight had been identified and should be immediately put on the no-fly list.


"Salla was detained by police after preliminary investigation. He was on board the flight which made an emergency landing this morning. It was revealed that Salla had put the threat letter in the plane's washroom. We will take necessary action against him," the official said.


"This is the second time when Salla did such a mischief with Jet Airways. A few months ago, he tried to harass the airline using some other trick. It seems that Salla has some grudge against the airline," he said.


He was being questioned by senior police officials at an undisclosed location. Flight 9W 339, which had taken off from Mumbai at 2.55 am with 115 passengers and seven crew members, landed without incident at Ahmedabad around 3.45 am.


The Boeing 737-900 plane was parked at a remote bay and all 122 safely deplaned, a Jet Airways spokesperson said. The printed note, in Urdu and English, said the flight had 12 hijackers on board and a bomb in the cargo area and should be flown straight to PoK (Pakistan-occupied Kashmir).