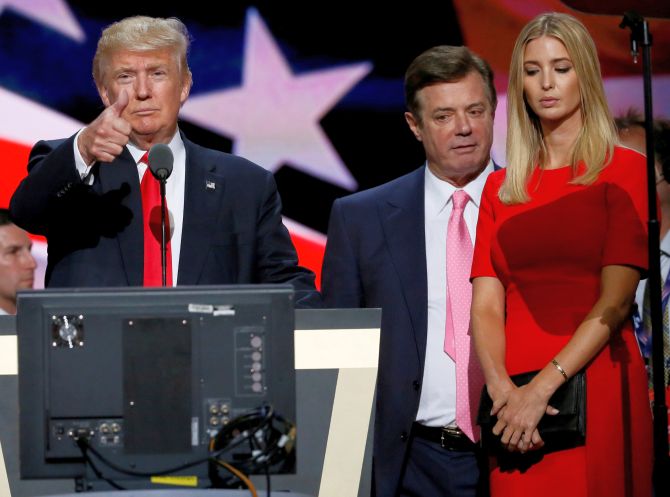 Former Donald Trump campaign manager Paul Manafort has been indicted in the first charges brought by the special counsel investigating Russia's role in the 2016 presidential election.
Justice Department special counsel Robert Mueller has indicted Manafort on 12 counts including money laundering, false statements and conspiracy against the United States.
Manafort turned himself in to the Federal Bureau of Investigation's Washington field office on Monday.
The 31-page indictment was filed on Friday, but unsealed on Monday.
Along with Manafort, his business associate Rick Gates was also indicted by the federal grand jury.
In recent months, Trump has distanced himself from Manafort who ran his presidential campaign from June to August 2016, a period that included the Republican National Convention.
Image: US President Donald Trump can be seen in this file image with his campaign manager Paul Manafort and daughter Ivanka at the Republican National Convention in Cleveland  on July 21, 2016. Photograph: Rick Wilking/Reuters
« Back to LIVE