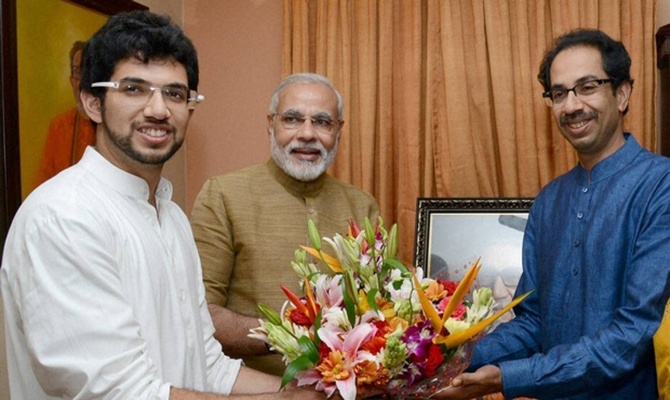 Without mincing words, Shiv Sena MP Sanjay Raut today termed the Bharatiya Janata Party his party's "principal enemy" and said it is part of the Maharashtra government "just for the sake of it".
His remarks came on the eve of the Devendra Fadnavis govenment's third anniversary.
Raut also praised Rahul Gandhi saying there has been a substantial change in him over the last three years.
"The BJP owns the government. We are (in the government) just for the sake of it. Instead of hitting out at the Congress and NCP, the BJP targets the Sena. They (the BJP) are thus our principal enemy," Raut told reporters in Nashik.
On Rahul Gandhi, the Rajya Sabha MP said, "A leader is one who is accepted by people. There is a substantial change in Rahul Gandhi since 2014. People like to listen to him now."
The Uddhav Thackeray-led party has begun preparations for the Lok Sabha and assembly polls of 2019 and it is ready to fight elections whether or not there is an alliance with the BJP, Raut said.
To a question on the Sena's stand on encroachment by hawkers on the Mumbai streets, Raut said Bal Thackeray, the late Sena chief, was the first to raise the issue.
"Balasaheb was the first person to speak on this issue. Today, unless the chief minister provides police protection to corporation employees, the civic body cannot remove encroachments," he said.
Asked about former Congress leader Narayan Rane -- who started his career with the Shiv Sena before a bitter parting of ways -- joining the state cabinet, Raut said he had been hearing rumours of cabinet expansion for long, and he would comment on it only when it happens.
« Back to LIVE