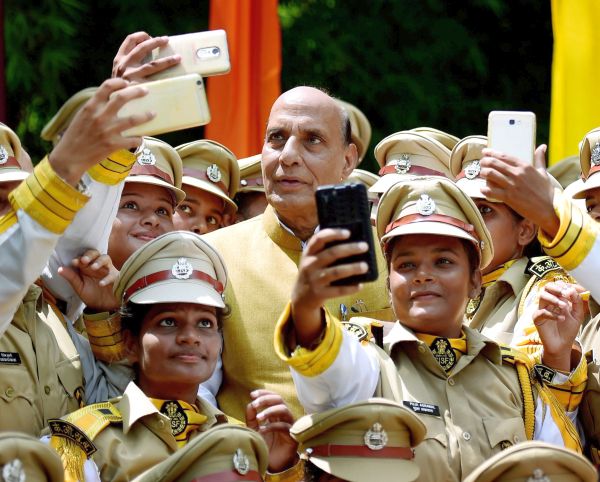 Anti-India forces, unable to stomach its growing economic might, want to damage the country and weaken its strategic position, Union Home Minister Rajnath Singh said today.
Terrorism is a "big threat" today but Prime Minister Narendra Modi has taken up the issue strongly on the global stage, taking onboard most countries to address the issue, he said.
In his address after reviewing the passing out parade of the personnel of Central Industrial Security Force in Tamil Nadu's Arakkonam, Singh said the day is not far when India would become an economic power.
"Today, India is counted among the emerging economies of the world. It is emerging as the fastest growing (large) economy in the world. I can say that India is one among the top 10 economies of the world today," he said.
The world has started "realising" the fact that the day is not far when by 2030 India will be among the top three economies of the world, he said.
The size of India's economy was approximately USD two trillion and it was likely to touch USD 5 trillion by 2030, he said.
"But anti-India forces basically don't like all these trends. They want to cause damage in those sensitive areas where its economic and strategic strength could be weakened," he added.
Terrorist organisations want to "inflict damage" on the country, he said, calling terrorism a "big threat" to many countries."
"Terrorism is a big threat...the 9/11 attacks in the US and the 26/11 incidents in India have shown that the impact of terror strikes can be felt for a long time," he said.
The home minister urged the CISF, tasked with guarding the country's vital strategic installations like airports and industrial units, to have "core competence" to tackle terrorism.
"So, the CISF should undertake regular security audit of every installation and use new technologies to strengthen the security of such installations," he added.
He termed cyber attacks as the "new face" of terrorism. -- PTI
Image: CISF women personnel taking selfie with Union Minister Rajnath Singh after a passing out parade at Arakkonam in Tamil Nadu on Monday. Photograph: R Senthil Kumar/PTI Photo
« Back to LIVE