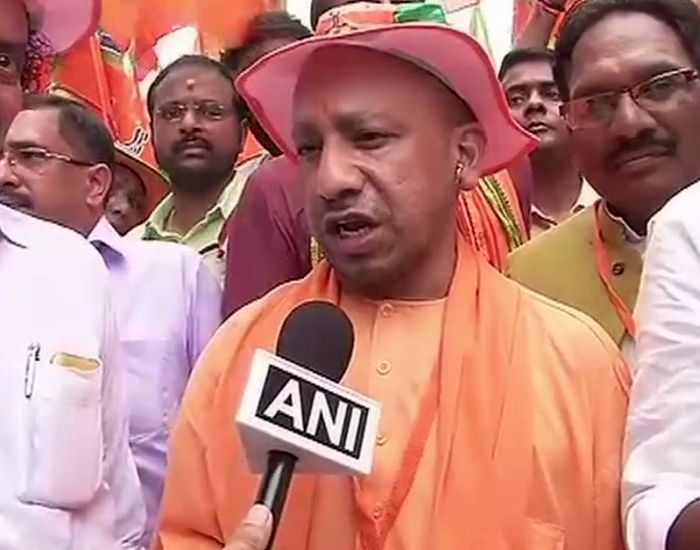 Uttar Pradesh Cheif Minister Yogi Adityanath arrived in Kerala's Kannur today to take part in Jana Raksha Yatra over killing of Bharatiya Janata Party, Rashtriya Swayamsevak Sangh workers in the state.
The saffron-robed Yogi landed at Keecheri and began his yatra on foot.
Adityanath said that he has come to oppose the atmosphere of terror.
"There is no space for violence in a democracy. Yet murders are happening in Kerala on a regular basis as innocent people belonging to BJP and allied organisations are being killed," he said.
"An atmosphere of terror has been created in Kerala. Every Indian must oppose it. I too have come to do so," he added.
BJP's Hindutva face, Adityanath is expected to raise the pitch of the party's attack on the Communist Party of India Marxist-led Left Democratic Front government
On Tuesday, BJP chief Amit Shah set off on a 15-day foot march to protest the CPI-M's alleged violence against workers of his party.
He was later joined by a large numbers of supporters as he walked over nine kilometres, blaming the ruling CPI-M for "political murders" of BJP and RSS workers.
« Back to LIVE

Sania-Pavic in second round of Wimbledon mixed doubles

India's Sania Mirza, who is making her final Wimbledon appearance, and Mate Pavic advanced to the second round of mixed doubles event with a hard-fought win over David Vega Hernandez and Natela Dzalamidze.

Hike in import duty on gold may fuel smuggling

The government has hiked gold import duty to 15 per cent from 10.75 per cent to check the current account deficit (CAD) and rising import of the yellow metal. The duty changes came into effect on June 30. Earlier, the basic customs...

Tailor Kanhaiya Lal was killed on Tuesday afternoon by two cleaver-wielding men, Riaz Akhtari and Ghouse Mohammad, who posted a grisly video of the crime online claiming responsibility for the 'beheading'.