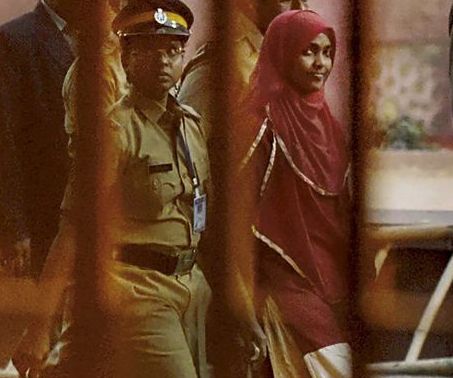 KM Ashokan, the father of Hadiya Jahan reacts to the Supreme Court order yesterday which freed her from his custody and sent her to college to pursue her studies.

Ashokan said, "We never abused her. I am happy with the Supreme Court order. I was worried about her education but now I am happy. The annulment of their marriage stands upheld."

The Supreme Court yesterday freed Hadiya, alleged to be a victim of 'love jihad', from the custody of her parents and sent her to college to pursue her studies, even as she pleaded that she should be allowed to go with her husband.

After prolonged proceedings in the open courtroom, the top court did not accede to Hadiya's plea that she should be allowed to go with her husband.

She also told the court she wanted 'freedom' to live and profess the Islamic faith.


The apex court, which interacted with 25-year old Hadiya for nearly half-an-hour in the courtroom against the wishes of her father who had sought an in-camera interaction, directed the Kerala police to provide her security and ensure that she travelled at the earliest to Salem in Tamil Nadu to pursue homepathy studies at Sivaraj MedicalCollege there.

Hadiya was in the custody of her parents for almost six months, after the Kerala high court had on May 29 annulled her nikah with Shafin Jahan.

Hadiya, a Hindu by birth, had converted to Islam several months before her marriage.

The court fixed the plea of Jahan, challenging Kerala high court's order annulling his marriage with Hadiya, for hearing in the third week of January next year.