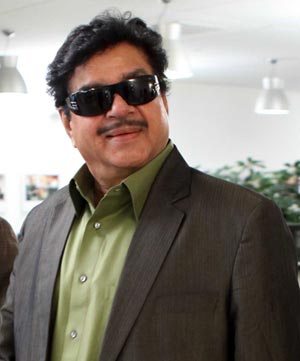 
"As 'Padmavati' becomes a burning controversy, people are asking why the legendary Amitabh Bachchan, most versatile Aamir Khan and most popular Shah Rukh Khan have no comments. And how come our I&B Minister or our most popular Honourable PM (according to PEW -- American think tank PEW poll) are maintaining stoic silence. High time!" Shatrughan tweeted on Wednesday.


The tweet also said that he will speak about the controversy keeping in mind the interest of filmmaker Sanjay Leela Bhansali and the sensitivity of the Rajputs.


"As for me, I would and should speak on 'Padmavati' issue only after the 'great filmmaker, producer Sanjay Leela Bhansali' speaks up. I speak only when I am spoken to and I will speak keeping in mind the interests of the filmmaker as well as the sensitivity, valour, loyalty of the great Rajputs," he added.


In Padmavati, actor Ranveer Singh plays Delhi Sultan Alauddin Khilji, which Bhansali says is a tribute to the valour of Rajput queen Padmavati, played by Deepika Padukone.A BJP leader has announced a reward of Rs 10 crore for beheading Bhansali and Deepika.


The film is in the eye of a storm following protests from conservative groups over alleged tampering with historical facts -- a contention Bhansali has denied repeatedly.The release of the film, which was earlier slated for December 1, has been deferred as the filmmakers are yet to secure a censor certificate.
« Back to LIVE