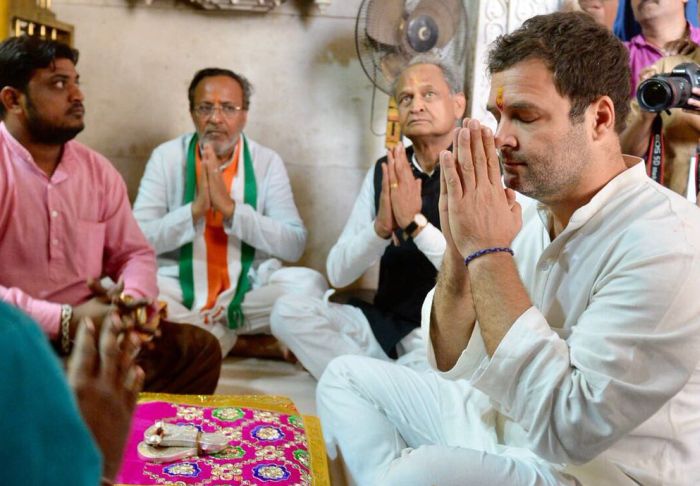 Launching a scathing attack on Rahul Gandhi over his visits to temples in poll-bound Gujarat, senior Bharatiya Janata Party leader G V L Narasimha Rao today accused him of following in the footsteps of medieval sultans like Alauddin Khalji and Aurangzeb.

"Aurangzeb (a Mughal emperor) had destroyed many temples during his rule. However, when the common people opposed him, he promised to build two-three temples. Alauddin Khalji did the same...And now Rahul Gandhi is going in the same direction," Rao said.

During his campaign trail, Gandhi visited a string of temples in Gujarat, including the famous Akshardham shrine.

The BJP has accused him of playing the soft Hindutva card in a bid to attract the majority community.

Talking to reporters, Rao termed as 'good' the proposal of the Uttar Pradesh Shia Waqf Board on resolving the Ayodhya issue and asked Gandhi to clarify the party's stand by breaking his 'silence'.

He also asked the Congress to explain how its viewed 'invader' Mughal emperor Babur, who is believed to have constructed the mosque in Ayodhya in 16th Century.

"Gandhi's visits to temples is a drama. Gandhi is trying to mislead the people by embarking on temple visits, which has become a compulsion for the Congress vice president in view of the elections," the BJP leader said.

He said the Congress' 'dream' of celebrating 'Muhammad Ghazni Jayanti' in Gujarat would never become a reality as the party would never win the polls.

"The Congress is celebrating Tipu Sultan 'jayanti' in Karnataka, and is now dreaming of celebrating Muhammad Ghazni Jayanti in Gujarat," Rao said. -- PTI
« Back to LIVE