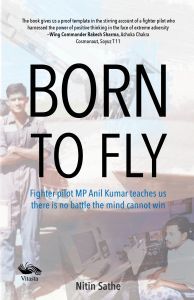 The biography of Indian Air Force fighter pilot and the late Rediff.com columnist M P Anil Kumar -- has just won the Award for Best Non Fiction at the Valley of Words International Literature Festival in Dehradun.


Paralysed neck down after a freak road accident, MP became an inspiration to many in the way he courageously rebuilt his life. The MiG pilot lived within the confines of the armed forces paraplegic home in Pune for 25 years from where he wrote extensively and touched countless lives.


Born To Fly is Air Commodore Sathe's second book. His first book A Few Good Men and the Angry Sea chronicled how a dedicated team of IAF officers and men -- of which he himself was a part -- rebuilt the strategic Car Nicobar air force base in record time after it was devastated in the December 26, 2004 tsunami.


The seeds of Born To Fly were sown on Rediff.com when then Group Captain Sathe wrote about M P Anil Kumar in this evocative feature.
« Back to LIVE