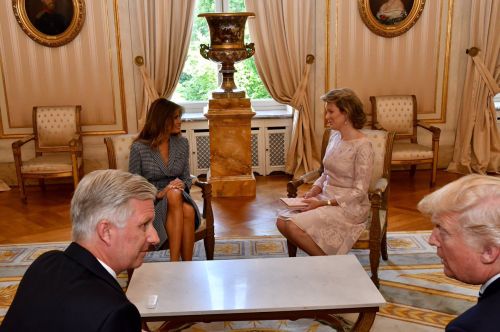 United States President Donald Trump arrived in Brussels on the fourth leg of his first foreign trip since taking office after visiting Saudi Arabia, Israel, and Vatican City. Trump and his wife Melania were accorded a royal welcome upon their arrival in the city which he once called as a "hellhole" due to issues stemming from Muslim immigration.

Trump, during his meeting with Prime Minister Michel, pledged to work together on various problems and emphasised that terrorism was number one problem, CNBC News reported.

He will also be meeting French President Emmanuel Macron and then head to NATO summit which will include a discussion focused on military spending and fighting terrorism.

Trump will then fly on to Sicily for a meeting of the G7 economic powers.


Image: US President Donald Trump and First Lady Melania meet the King and Queen of Belgium at the royal palace in Brussels.
« Back to LIVE