« Back
EC rejects AAP demand for permission to tamper with EVM motherboard during challenge
May 25, 2017  21:06 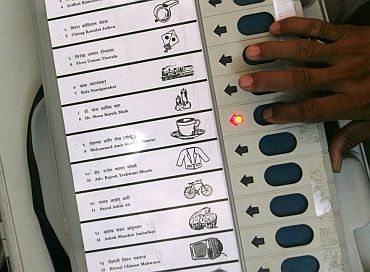 The Election Commission today rejected the demand of the Aam Aadmi Party to allow it to tamper with the motherboard of the electronic voting machines during the EVM challenge.
The EC said the EVM would lose its originality if changes are made to its internal circuitry.
The AAP had yesterday asked the Commission not to have any set guidelines for the EVM challenge as a person planning to hack the machine would not go by the rules set by the poll panel.
The poll watchdog also said the demonstration held inside the Delhi assembly to prove that the machines can be hacked was carried out on a "look alike" EVM and not on the one used by the Election Commission.
Referring to the party's demand to allow it to tamper with the motherboard of the machine, the EC said "allowing any change of the motherboard or any internal circuit of the EVM is like saying that anyone should be permitted to manufacture a new machine and introduce newly made EVMs in EC system, which is implausible and irrational".
The proposed challenge is on June three for which seven national and 48 regional parties recognised by the EC have been invited.
« Back to LIVE