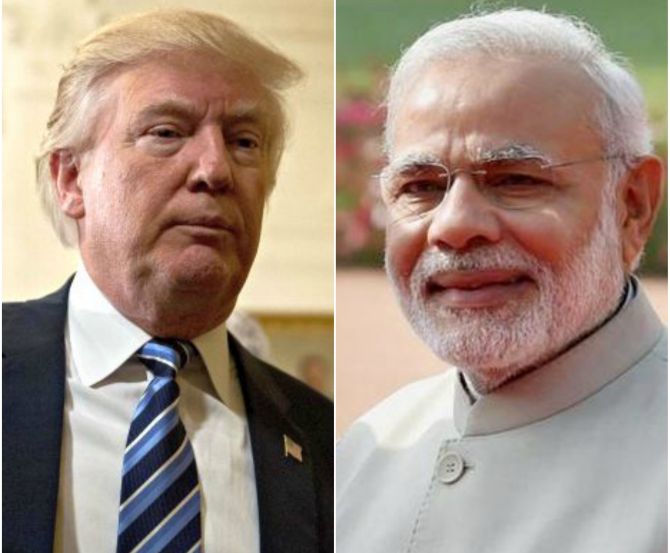 The first meeting between Prime Minister Narendra Modi and United States President Donald Trump is expected to take the Indo-US ties to the next level, Indian Ambassador to the US Navtej Sarna said.
Maintaining the upward trajectory of the Indo-US ties of the last three decades, beginning with the Clinton (Bill) administration and followed by those of Bush and Obama, signals coming from both sides strongly indicate stronger continuation in that regard.
"We really think that this visit will leverage the relationship to a higher level," Sarna told PTI.
Modi and Trump, who have earlier spoken three times over phone, would be together spending several hours at the White House, beginning a one-to-one meeting, followed by a delegation level talk, a cocktail reception and a working dinner, the first for a foreign leader inside the White House under the Trump administration.
"It would be historic, never seen before," a mid-level American source familiar with the preparations told PTI.
The source, however, did not elaborate the nature of the outcome of the visit, but reiterated that it would bring the two countries closer than ever.
Trump, has been personally involved in the preparation. Elaborate arrangements are being done by the White House kitchen for Trumps dinner with Modi.
Modi and Trump are among the most followed world leaders on the social media. Together they have more than 60 million followers on their personal accounts.
The two leaders are expected to discuss a wide range of issues during their White House interaction.
« Back to LIVE