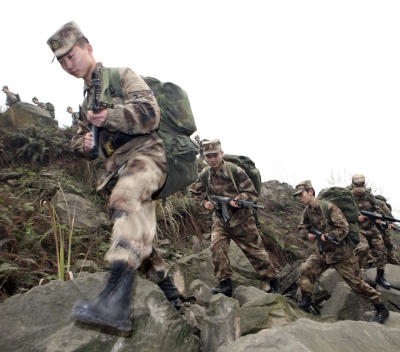 In another transgression, Chinese troops entered India in the Sikkim sector and jostled wit hIndian army personnel guarding the Sino-India frontier,besides destroying two bunker.
The face-off has been going on in Doka La general area in Sikkim for the past ten days and the Chinese troops have also stopped the batch of pilgrims that was proceeding for Kailash Mansovar yatra, official sources said today.
The Indian troops had to struggle hard to stop the Chinese personnel from advancing further into Indian territory. They formed a human wall along the Line of Actual Control to stop the PLA personnel, some of whom also videographed and click pictures of the incident.
The bunkers has been destroyed in Lalten area of the DokaLa area. A flag meeting was also held between senior army officers of both the sides on June 20, but the tension still continues.
It is not the first time that such a transgression has happened at the Doka La, a place at the Sikkim-Bhutan-Tibettri-junction. The Chinese forces had in November 2008 destroyed some makeshift Indian army bunkers at the same place.
« Back to LIVE