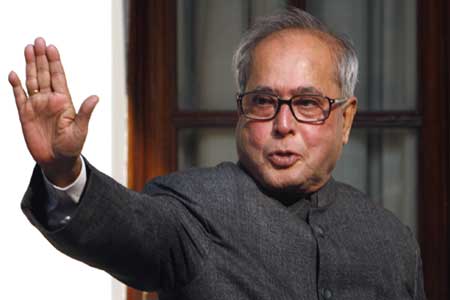 New Delhi is getting sprucing up to receive the next President. There are two places in Delhi which is seeing a flurry of activity.

First stop, Rashtrapati Bhavan. The President's residence is getting ready to receive the next head of state, which will take place on July 25, 2017 at 12:45 pm. Consequently, Military Secretary Major General Anil Khosla is getting all protocol in order.

Second stop, 10 Rajaji Marg. This is will be Pranab Mukherjee's new residence once he demits office. There have been a number of military trucks moving to and from between the two residences, carrying loads of books, beds, and assorted pieces of luggage. The entire move is being overseen by the deputy military secretary to President Mukherjee.

Major General Khosla said that the Blue Book on security is very clear that initially the security drill for the President will remain the same after he moves residences. After monthly reviews, the strength of the security personnel may be pared down considering the threat perception by the Intelligence Bureau and the Military Intelligence.

It is Military Secretary Anil Khosla, who will be a link between the outgoing President and the incumbent President. Khosla's term in the Rashtrapati Bhavan ends in October. Which means, once the new President is elected, Khosla will be part of the new president's retinue.

It is not yet certain, whether Omita Paul, who is Pranab Mukherjee's secretary, will be part of the staff of the new president, or remain
with Mukherjee. The president elect may also appoint a new Secretary before he is sworn in.