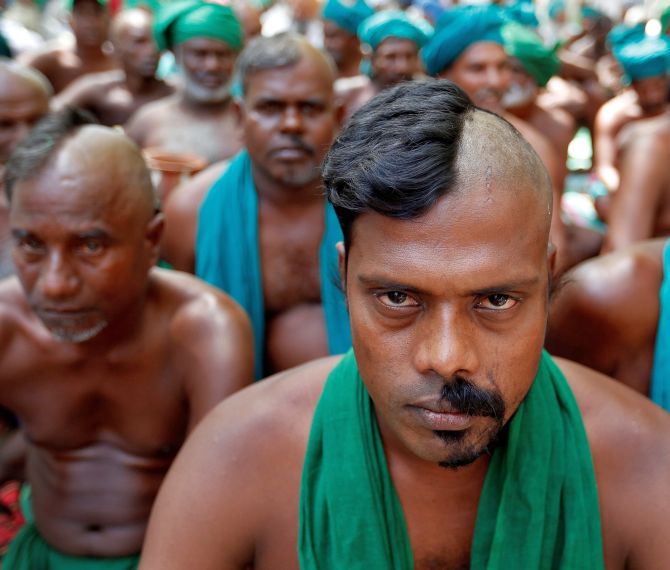 Scores of Tamil Nadu farmers, who had grabbed eyeballs with their unique protest earlier this year, today landed in the national capital to resume their agitation for loan waiver and drought-relief package.
Around 70 cultivators were, however, detained when they tried to stage a demonstration near the prime minister's residence on Lok Kalyan Marg. They were later taken to Parliament Street police station.
"Our demands were not met as promised by Tamil Nadu Chief Minister Edappadi Palaniswami and Union minister Pon Radhakrishnan. So we have decided to resume our protest for another 100 days," farmers' leader P Ayyakannu said.
The farmers from the southern state have been demanding a drought relief package of Rs 40,000 crore, farm loan waiver and setting up of Cauvery Management Board by the Centre.
They will join an indefinite protest after their counterparts, taking part in 'Kisan Mukti Yatra', reach Jantar Mantar here on July 18.
The group led by Ayyakannu had in March staged novel protests by holding human skulls outside the prime minister's house, stripping naked outside the president's and drinking urine.
« Back to LIVE