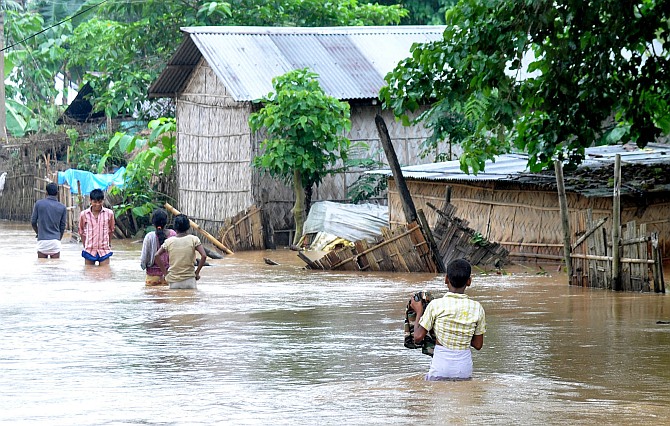 With heavy rains triggering flash floods in parts of Rayagada and Kalahandi districts, the Odisha government on Sunday sought the help of the army and the air force to rescue the marooned persons and urged the Centre to provide four helicopters to intensify relief and rescue operations.
After holding an emergency meeting here with officials, Chief Minister Naveen Patnaik said due to continuous downpour the water level of Nagabali and Kalyani rivers had risen and many places of Kalyansinghpur block in Rayagada district and Kalahandi district were inundated.
The state government sought the help of the army and the Indian Air Force to evacuate the marooned villagers. The IAF choppers will be used in Kalyansinghpur block, where people are trapped on rooftops of submerged houses.
The chief minister said while the situation is being closely monitored by senior officials, the Odisha Disaster Rapid Action Force, Central Reserve Police Force and fire services units have been rushed to expedite rescue operations.
« Back to LIVE