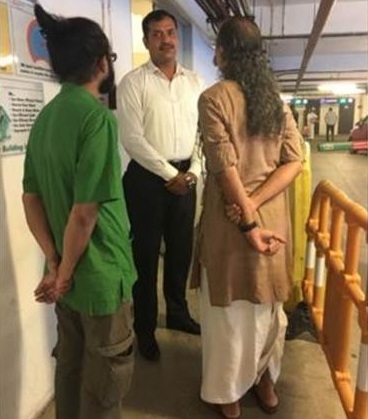 Bengali filmmaker Ashish Avikunthak on Saturday claimed that he was denied entry into a city mall for wearing a dhoti, which was denied by the mall authorities.
The Facebook post by the director, which triggered an outrage in the social media, said "Denying entry into the neo-colonial clubs of Kolkata is nothing new. But today I was denied entry into the .... mall because I was wearing dhoti (which I have been wearing for the last 26 years). On resisting and questioning I was told that we have orders because of security reasons to prohibit entry of people in
lungi and dhoti. I was eventually allowed in because I could argue in English and assert myself."
"This is unambiguously a new low for this city. Private clubs have always created hierarchies and distinctions because of clothing. Now public spaces are also threatened and a culture of segregation based on class is being practiced unhindered. I write this with a sense of deep disgust," he said.
When contacted Avikunthak told PTI, "What have I to say about the whole incident? Please go through my Facebook post which has narrated the entire consequence."
Avikunthak's companion Debaleena Sen told PTI, "We were about to enter the mall when Ashish was stopped by security guards who said he can't be allowed inside since he was wearing a dhoti. As we argued and Ashis spoke in English the mall officials came and allowed him in.
"Probably after hearing him speak in English they were assured that he belonged to higher social profile and can be allowed in. We immediately came out in protest."
Debleena claimed she was video recording the whole incident on her mobile, which the mall employees asked her not to. "This shows they want to hide their racist attitude."
The mall authorities when contacted denied the charges. They said the security personnel at the gate, who form the first ring of security at the mall, had asked the film director to wait and went to the supervisor to seek his opinion. He was then allowed in.
« Back to LIVE