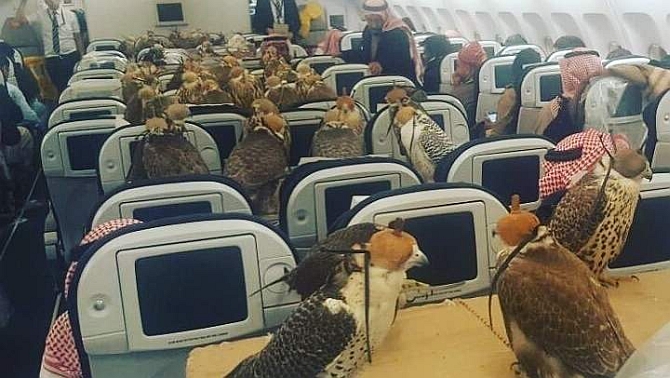 In an unusual sight, a Saudi prince is claimed to have bought tickets of a passenger jet for his 80 falcons, according to media reports.
A picture posted on the Reddit has gone viral which shows a flock of blindfolded falcons seated on a plane around the cabin among passengers, each bird seemingly tied securely down to the seats.
Reddit user lensoo posted it online, writing: "My captain friend sent me this photo. Saudi prince bought ticket for his 80 hawks," the Khaleej Times reported.
Transportation of falcons, the national bird of the UAE, is not a rare practice in the Middle East.
Falcons can get their own forest green passports to fly in the UAE. That passport allows them to travel to Bahrain, Kuwait, Oman, Qatar, Saudi Arabia, Pakistan, Morocco, and Syria. Qatar Airways' website also states that a maximum of six falcons can be brought on economy class.
« Back to LIVE

Sania-Pavic in second round of Wimbledon mixed doubles

India's Sania Mirza, who is making her final Wimbledon appearance, and Mate Pavic advanced to the second round of mixed doubles event with a hard-fought win over David Vega Hernandez and Natela Dzalamidze.

Hike in import duty on gold may fuel smuggling

The government has hiked gold import duty to 15 per cent from 10.75 per cent to check the current account deficit (CAD) and rising import of the yellow metal. The duty changes came into effect on June 30. Earlier, the basic customs...