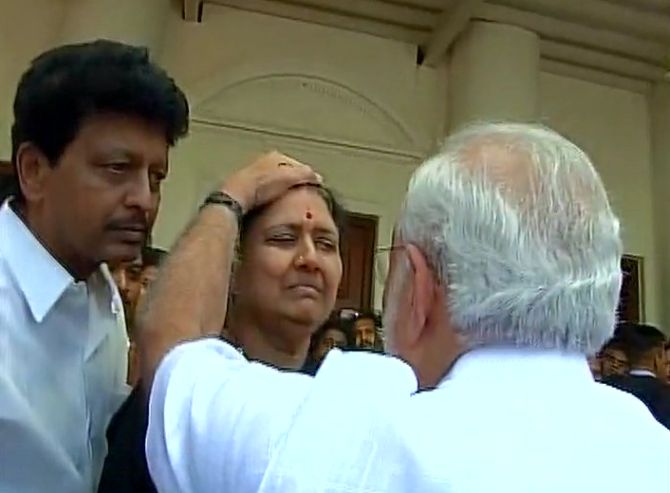 M Natarajan, husband of AIADMK general secretary V K Sasikala, has accused "some sections" in the BJP of trying to split the AIADMK and get the state government dismissed.
"They are trying to break the AIADMK and dismiss our government. They are trying to besmirch our government. There are also attempts to saffronise Tamil Nadu but they will not succeed. I will tour the entire state and tear their mask," he said.
"We will not allow such conspiracies to succeed... I will face the challenge squarely... I am willing to come anywhere single-handedly, to Gujarat, to UP, anywhere," he said while addressing the valedictory session of the three-day 'Thamizhar Kalai Ilakkiya Pongal Thiruvizha' (Tamil art and literary Pongal festival) in Thanjavur.
Image shows Prime Minister Narendra Modi consoling Sasikala at Rajaji Hall, Chennai, where Jayalalithaa's body was kept for public viewing on December 6, 2016. Watching on is Natarajan, Sasikala's husband who had been turned out by Jayalalithaa during her lifetime. Photograph: ANI.
« Back to LIVE