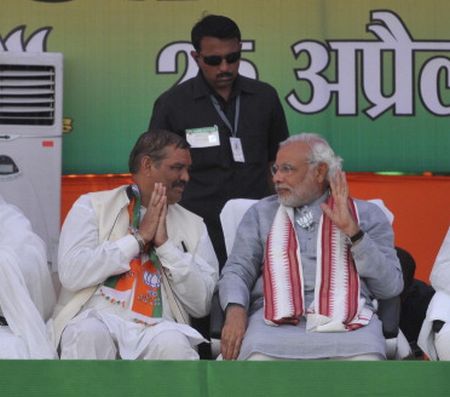 Hours after the Bharatiya Janata Party released six more names for the Punjab assembly polls, its state unit chief Vijay Sampla expressed his displeasure over the ticket distribution, and offered to step down from the post of party's state unit chief as well as that of cabinet minister.

According to sources, Sampla, who is minister of state for social justice and empowerment, is unhappy with the BJP fielding Som Prakash from Fagwara constituency as he wanted a person of his choice to contest the polls from Fagwara.

Sampla has said that he is ready to offer his resignation from the party leadership and also from the cabinet minister's post if the BJP top brass doesnt amend its decision of fielding Prakash from Fagwara.

The saffron party has dropped two ministers in Punjab government from the list of its remaining six candidates for the state assembly polls, which is scheduled to take place on February 4.

With announcement of these six more names for the Punjab assembly polls, the party has announced all its 23 candidates out of 117 seats for Punjab, where it is in alliance with the Shiromani Akali Dal.

The BJP had on January 12 announced first list of 17 candidates for state assembly polls. The last date of filing the nomination is January 18. SAD-BJP is locked in a tough battle with the Congress and the Aam Aadmi Party, which has emerged as a formidable third force in the state. -- ANI