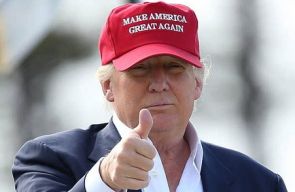 Donald Trump's inauguration theme will be same as his campaign slogan, "Make America Great Again" in order to focus less on the real estate mogul and more "on the place, on the people," media reports said.
The President-elect and Vice President-elect Mike Pence will participate in an over 200 years old tradition to take oath of office on January 20.
"We're going to have a very, very elegant day. January 20 is going to be something that will be very, very special, very beautiful," Trump was quoted as saying by the Politico.
On January 19, Trump and Pence will lay wreaths at the Tomb of the Unknown Soldier in Arlington National Cemetery. Then there will be several marching band performances at the "Voices of the People", held on a stage on the southwest end of the Reflecting Pool.
After "Voices of the People", the President-elect and Vice President-elect will deliver remarks at the "Make America Great Again! Welcome" concert at the Lincoln Memorial.
"The theme is very simple," Trump inauguration Chairman Tom Barrack was quoted as saying by ABC News.
« Back to LIVE