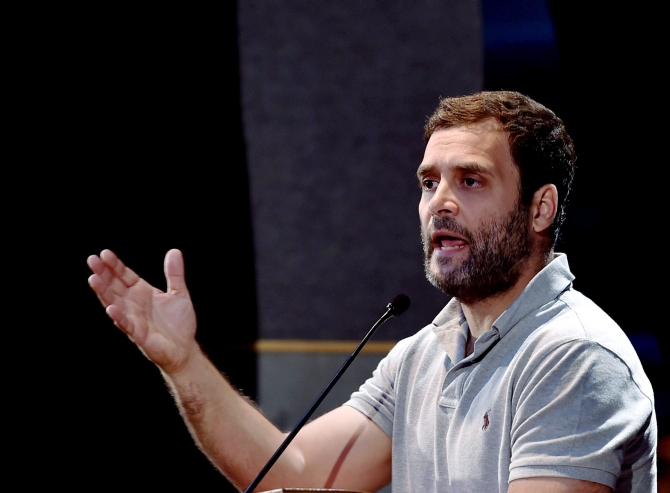 Rahul Gandhi today took a jibe at BJP for approaching the Election Commission to demand freezing Congress' poll symbol by alleging that he had violated the model code of conduct by linking his party symbol "hand" with religious figures during a speech.
"Dear BJP, daro mat (Dear BJP, don't be scared)," he wrote on the micro-blogging site Twitter.
The tweet comes after a BJP delegation comprising Union ministers Prakash Javadekar and Mukhtar Abbas Naqvi lodged a complaint with the Election Commission against Gandhi and sought freezing of the poll symbol.
"The grand old party Congress' grand new leader has tried to give communal colour to the elections by his statement in which he co-related the Congress' 'hand' with various religious figures. This is a clear cut case of corrupt practice. There should be action against both Congress and its leader," Naqvi told reporters after filing complaint with Election Commission.
At Congress' 'Jan Vedna Sammelan' earlier this month, Gandhi had made comments co-relating his party's poll symbol 'hand' with gods, violating the provisions of the Representation of the People Act, 1951, model code of conduct and the guidelines issued by the Supreme Court, the BJP has alleged in its complaint.
« Back to LIVE