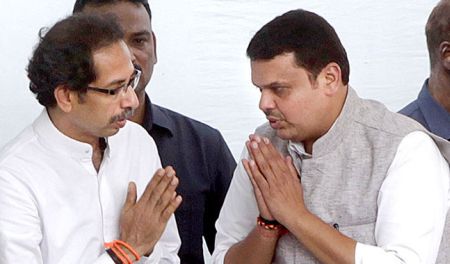 Shiv Sena is "likely" to go it alone in the upcoming city civic body polls, party sources said today, even as it formally begins talks on alliance with BJP tomorrow.
Leaders in both Sena and BJP feel that the parties will fare better if they contest on their own, and, if needed, they could go for a post-poll tie-up for the Asia's biggest civic body -- the Brihanmumbai Municipal Corporation.
Sources in BJP also said that their party should be ready to go alone instead of yielding to the demands of Sena, which shares power with it at the Centre and in Maharashtra though the ties have been frosty since the 2014 assembly polls.
« Back to LIVE