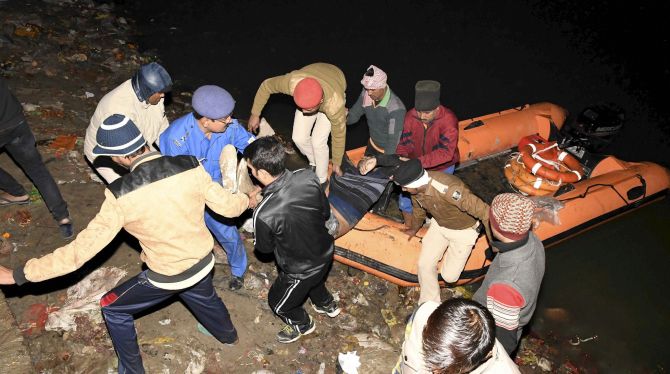 Death toll in Bihar boat tragedy has risen to 24, while search and rescue operations by National Disaster Response Team are underway.

Earlier, in the morning, the NDRF DG had said that 21 bodies have been recovered. However, three more have been found since then.

"21 bodies have been recovered so far, search and rescue ops underway. Three NDRF teams are at the spot," R K Pachnanda, director general of the NDRF, had said.

Meanwhile, expressing grief at the tragedy, Prime Minister Narendra Modi announced ex gratia from PMNRF of Rs 2 lakh for the next of kin of those deceased and Rs 50,000 for the seriously injured

IMAGE: SDRF team recovers a passenger's body after a boat capsized in the Ganga river in Patna. Photograph: PTI Photo