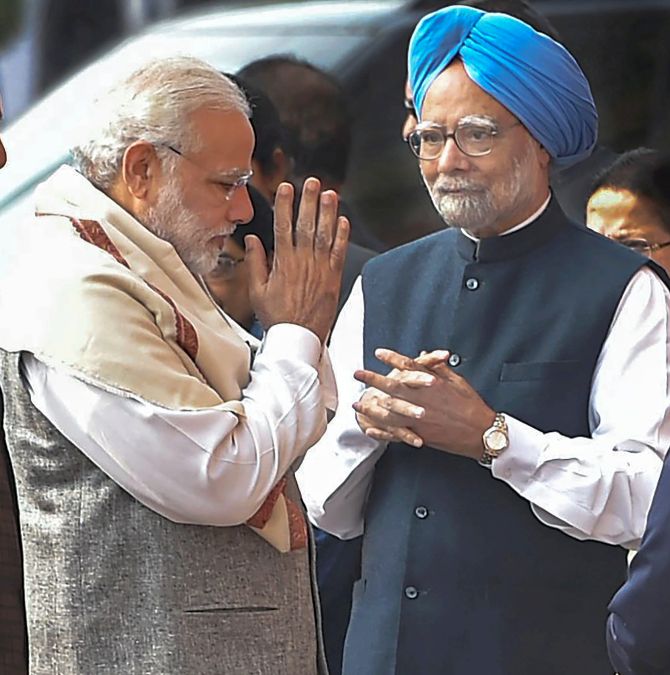 The Congress on Thursday asked Prime Minister Narendra Modi to shed his "raaj-hatth" (stubbornness) and clarify in parliament his 'conspiracy with Pakistan' remarks against his predecessor Manmohan Singh to end the stalemate and enable a discussion on issues such as the Rafale deal.


He also accused the government of wanting to continue the standoff so that issues of critical concern to the people are not taken up.


Sharma alleged that the government does not want the opposition to raise issues of acts of "commission and omission" and the wrong decisions of the prime minister.


He said that the government does not want that it is exposed on the floor of the House on issues such as the Rafale deal which the opposition wants to discuss.


"It is the responsibility of the PM to clear doubts regarding his accusations. It is his duty to restore the dignity of the office and in the interest of parliamentary democracy that this deadlock comes to an end," Mr Sharma told reporters.


"We urge the prime minister to shed his 'raaj-hatth' (stubbornness) and clarify his remarks against (Manmohan) Singh and (Hamid) Ansari, which he made to win Gujarat polls," Sharma said.


The stalemate, he said, continues primarily because of the attitude of the government and obduracy of the prime minister, who refuses to register the seriousness of the situation resulting from his "baseless and unwarranted aspersions" for electoral gains.


He said, as one who is occupying the constitutional office, it is the duty of the prime minister to restore the dignity of the office of the institution.


Whatever is said in politics, never before a prime minister has pointed any finger of suspicion on the commitment to the country of former prime ministers or former vice presidents or even the former Army chief.


"It is in national interest, in interest of parliamentary democracy that this deadlock is brought to an end. It is unfortunate that prime minister has still not apologised for his ill-thought accusations against the former PM Manmohan Singh who was PM for 10 years and dedicated his life for this country," he said.


Sharma, however, said it is being conveyed by government that the prime minister is not willing to take back his words.


He "disappointed" the opposition on Thursday when it was his day for the Question Hour in the Rajya Sabha, the Congress leader said.Mr Sharma said the opposition also wants to raise other issues concerning the economy and job losses.


The Indian economy has suffered losses due to some "wreckless" decisions of the prime minister, he alleged. -- PTI
« Back to LIVE