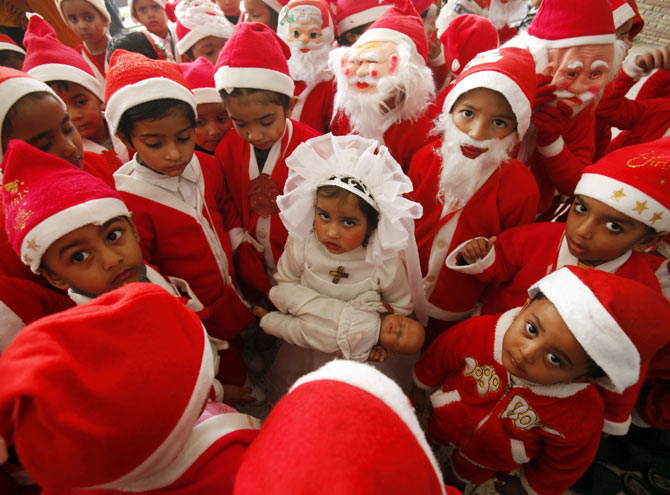 Taking note of the RSS-affiliate Hindu Jagran Manch's threat to all Aligarh schools against celebrating Christmas, the Uttar Pradesh Police has directed all district police chiefs to take strict action against those indulging in intimidation of any sort.
"The Aligarh SSP and all district police chiefs have been directed to take strict legal action against those indulging in intimidation of any sort," Additional Director General, Law and Order, Anand Kumar said.
The ADG also directed all district police chiefs of the state to ensure the freedom of practicing religion is protected.
The Manch issued a circular warning the managements of all Aligarh schools against celebrating Christmas and threatened, if they did so, it would be "at their own risk".
The warning set alarm bells ringing in all educational institutions in the Aligarh city, especially Christian schools.
"The circular would be reaching all schools very shortly and we will decide a course of action on receiving their response," Sonu Savita, city president of the Hindu Jagran Manch, told reporters in Aligarh on December 17.
Expressing concern, Praveen Agarwal, president of the Public School Development Society, Aligarh, said, "Each year we celebrate festivals belonging to all communities and this experience helps our children to play a responsible role as citizens of this country."
Similar sentiments were echoed by Anurag Gupta, convener of the Parents' Association, Aligarh, who said, "Our schools have been playing an important role in helping students acquire knowledge of different religions and this helps them when they move out to different countries all over the globe."
Senior superintendent of police, Aligarh, Rajesh Pandey, however, made it clear that the district authorities would not allow anyone to force any school not to observe or celebrate Christmas. -- PTI
« Back to LIVE