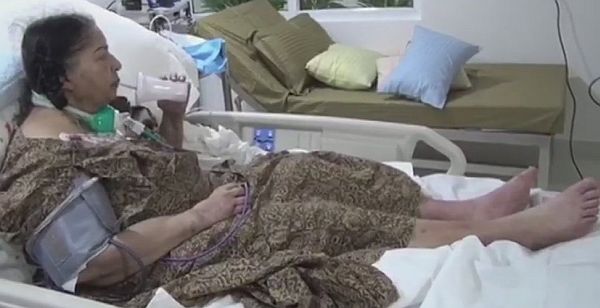 A visual of former Tamil Nadu CM J Jayalalithaa, when she had been admitted at Chennai's Apollo Hospital last year. The picture is a grab taken from a video released by TTV Dinakaran's supporter, P Vetriivel and shows Jaya sipping a drink while watch TV at the hospital.

VK Sasikalas family, who were with Jayalalithaa throughout her hospitalisation last year, has staunchly maintained that there is a video which clearly shows a conscious Jayalalithaa.

Doubts had been raised over whether Jayalalithaa was conscious even for a day and whether her thumb print was taken with her consent anointing O Panneerselvam as her successor.

The video has been released a day before Jayalalithaa's constituency goes to the polls tomorrow. Campaigning ended on Tuesday evening for the bypoll to the prestigious RK Nagar constituency.

While a total of 59 candidates are in the field, a triangular contest is on cards in RK Nagar bypolls among the ruling All India Anna Dravida Munnetra Kazhagams E Madhusudhanan, the partys sidelined leader TTV Dinakaran and the opposition DMK N Marudhu Ganesh.

Jayalalithaa had been admitted to hospital on September 22 last year and died on December 5.