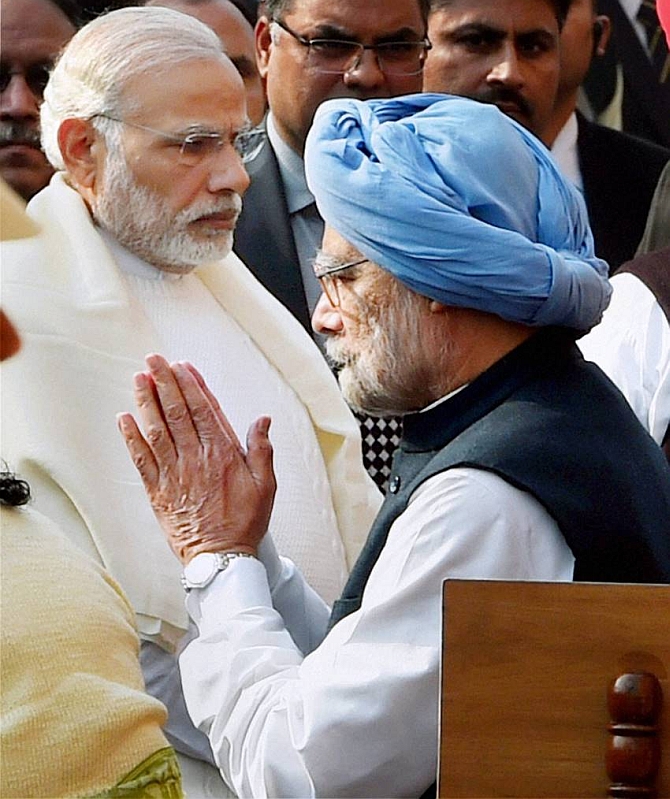 Congress members' protest over Prime Minister Narendra Modi's attack on his predecessor Manmohan Singh during the Gujarat polls drew condemnation from the government, which accused it of holding "mock proceedings" in the House in violation of the Chair's rulings.


Members of the opposition party trooped into the Well during the Question Hour after Speaker Sumitra Mahajan disallowed their demand to raise the issue. She said whatever had happened in an election campaign should not be used to disrupt the proceedings.


"The elections are over and the results are out. I cannot allow you to raise the issue here," she told the protesting members. It had little effect on them as they persisted with their protests raising slogans like 'Pradhan Mantri maafi mango' (Prime Minister apologise), even as Mahajan continued with proceedings in the din. She was later forced to adjourn the House for about half an hour due to the continued protests, which continued when the Lok Sabha met again for the Zero Hour.


With Congress president Rahul Gandhi and his mother Sonia Gandhi looking on from their seats, its members turned to addressing the Speaker from the Well one by one even as they could not be heard.


The Speaker continued with the Zero Hour proceedings during which members from ruling BJP and other parties raised various issues. Congress leader Mallikarjun Kharge then said something to the Chair, who did not allow him to speak. This was followed by the members of his party to stage a walk-out.


It prompted Parliamentary Affairs Minister Ananth Kumar to slam the opposition party, saying the conduct of the Congress was "shameful and condemnable".


"They entered the Well, which is itself condemnable. They then tried to conduct mock proceedings. One senior Congress leader after another kept speaking defying the Chair. Entire House condemns it," he said. At one time during the Question Hour, Mahajan had warned Congress MPs that she would 'name' them. Naming of a member by the Chair generally leads to disciplinary action. -- PTI
« Back to LIVE