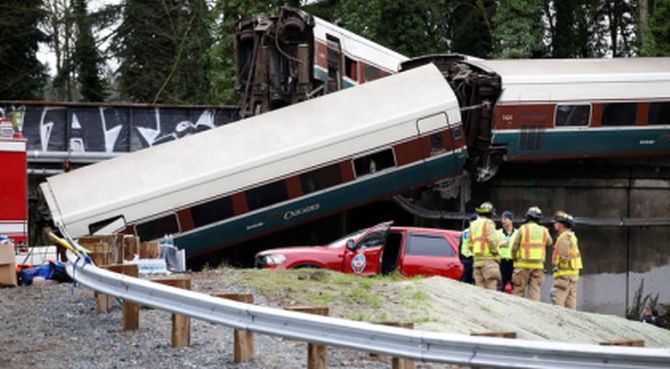 An Amtrak train derailed during its inaugural run on a faster route from Seattle to Portland, Oregon, sending passenger cars tumbling from a bridge onto a major highway, killing at least three people and injuring about 100 others.
Thirteen of the train's 14 cars jumped the tracks near the town of DuPont, Washington State Patrol spokeswoman Brooke Bova said. Officials said 77 passengers and seven crew were aboard.
Five vehicles and two trucks were involved in the accident, and the highway was littered with fragments of the bridge and tree branches. Some motorists were injured but none died, authorities said.
"We have been told there are three casualties at this time," Bova told a news conference, adding about 100 people were transported to area hospitals. "There are a lot of critical injuries."
She said all of the train cars have been searched, and emergency efforts would likely extend through the night and into the morning.
« Back to LIVE