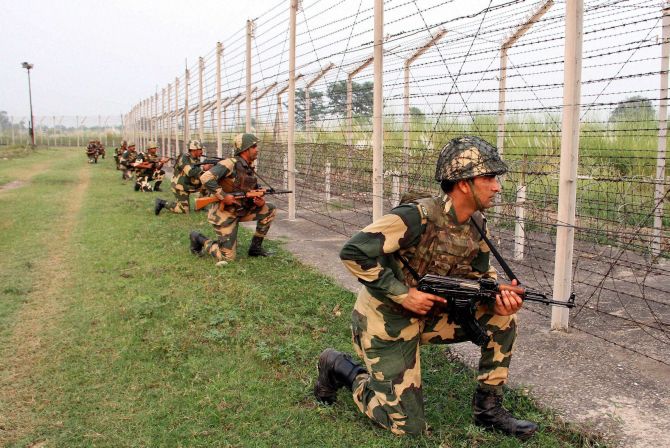 Pakistan violated the ceasefire a total of 881 times along the Line of Control and the International Border in Jammu and Kashmir this year, killing 30 people, the Lok Sabha was informed today.
Minister of State for Home Hansraj Ahir said Pakistan has violated the ceasefire along the LoC in Jammu and Kashmir 771 times till December 10, and 110 times along the IB till November-end.
In these incidents of firing from across the border, 30 people -- 14 Army personnel, 12 civilians and four BSF personnel -- were killed.
No cross-border firing has been reported in other states except Jammu and Kashmir along the border with Pakistan, he said replying to a written question.
The truce between India and Pakistan along the International Border, the Line of Control and the Actual Ground Position Line in Jammu and Kashmir came into force in November 2003.
India shares a 3,323-km-long border with Pakistan, of which 221 km of the IB and 740 km of the LoC fall in Jammu and Kashmir.
In 2016, there were 449 incidents of ceasefire violations in which 13 civilians and 13 security personnel were killed and 83 civilians and 99 security personnel were injured. -- PTI
« Back to LIVE