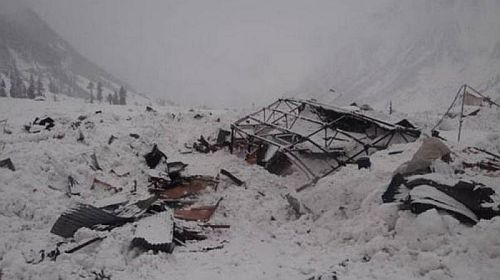 Search and rescue teams recovered bodies of three of the five soldiers who went missing along the Line of Control in the Gurez and Naugam sectors following heavy snowfall in Kashmir last week, defence sources said.


The bodies of two soldiers were recovered in the Gurez sector while the body of a jawan was recovered in Naugam sector yesterday, the sources said.


Two soldiers had slipped down a slope in Naugam sector of Kupwara district while three others went missing from a forward post in Kanzalwan sub-sector of Gurez of Bandipora district after heavy snowfall on December 12.


The search for the two missing soldiers--one each in the Gurez and Naugam sectors--is still going on, the sources said. -- PTI
« Back to LIVE