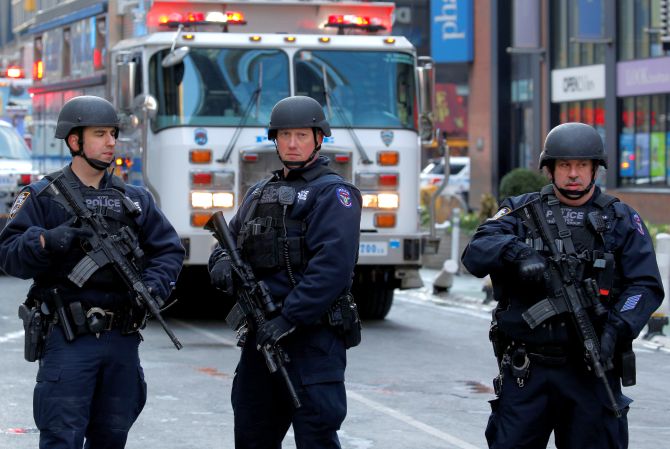 New York police today charged an Islamic State-inspired Bangladeshi-origin man, a day after he triggered a blast at a metro station that injured three other people and caused chaos in one of the busiest commuter hubs in the US metropolis.
Akayed Ullah, the 27-year-old suspected bomber, had wires and a pipe bomb strapped to his body. The device exploded prematurely yesterday between two subway platforms near Port Authority, which is America's largest bus terminal.
The New York Police Department tweeted that Ullah was charged with criminal possession of a weapon, supporting an act of terrorism and making a "terroristic threat".
Ullah is reported to be in a serious condition in hospital after suffering burns in the explosion.
Three other people suffered minor wounds in the blast during rush hour.
The suspect was taken into custody after the device partially exploded.
Ullah acted alone, police said, adding that the explosion was recorded on surveillance video.
No group has claimed responsibility for the explosion so far, though it is being treated as terror-related. -- PTI
« Back to LIVE

As wealth inequality grows, is it time for an Indian inheritance tax?

Billionaire Bill Gates, in a 2019 interview, supported bringing back a regulation in the US to require the super-rich to pay a 55 per cent tax when they inherit their family fortune. Proponents of an inheritance or estate tax say it...

Sania Mirza capped off her glorious Grand Slam career with a runners-up finish alongside 'best friend' Rohan Bopanna in the Australian Open mixed doubles final in Melbourne on Friday.