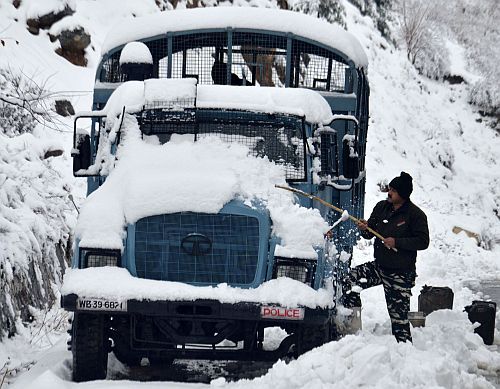 The Kashmir Valley was cut off from the rest of the country today as flight operations at the Srinagar airport were suspended and the Srinagar-Jammu National Highway and Mughal road were closed for traffic due to snowfall and rain.


The present weather conditions in Jammu and Kashmir are likely to continue till Thursday due to a western disturbance over the state, the meteorological (MeT) office said.


The 300-km long highway, the only all-weather road linking Kashmir with the rest of the country, was closed following heavy rains and snowfall at several places, including the Jawahar Tunnel, and incidents of shooting stones near Panthal.


Image: A soldier tries to remove snows from his truck.  The MeT has forecast more snow and rain in the valley over the next few days. Photo: Umar Ganie
« Back to LIVE