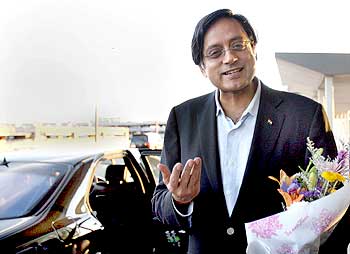 Veteran actor Shashi Kapoor passed away at the age of 79 on December 4 in Mumbai. As fans and followers of the gentleman actor are still coming to terms with his demise, condolences have already began pouring in on the Internet. However, there was a goof-up when  politician Shashi Tharoors office started getting condolence messages.
In his inimitable style, Tharoor said, that news of his death doing the rounds were if not exaggerated, at least premature.
In his heartfelt condolence message, the 61-year-old took to Twitter to post this: I feel a part of me is gone. A great actor, smart, cosmopolitan, impossibly handsome & w/a name that was often confused w/mine. (My office got two calls from journalists today about my reportedly serious ill-health!) I will miss #ShashiKapoor. Condolences2his family&all his fans. A minute later, he posted about how they have been receiving condolence calls at his office.
« Back to LIVE