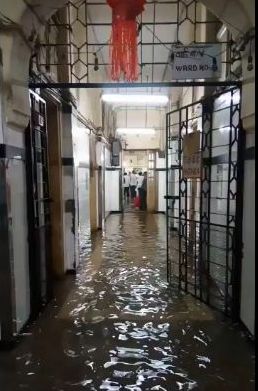 #Mumbairain: Rubber dinghies are out in waterlogged and low-lying Parel. @ParmarYash24 tweets this picture of Parel a few hours ago.

Water has also entered the corridors of the King Edward Memorial civic hospital in Parel, but patients were moved to higher floors. The Meteorological department has warned of extreme weather with more rains all through the day. This is the longest duration of rain the city has experienced since the July 2005 floods. On 26 July 2005, around 2 pm Mumbai was struck by a severe storm and subsequent deluge. The IMD station in Santacruz recorded 944 mm of rain for 24 hours ending 8:30 am on 27 July.

The Met and the BMC has cautioned people against stepping of their homes and offices. Most people could make it to their offices since the rain intensified only after 10 am. Flights have been delayed by over three hours, some have been cancelled, while others have been diverted. Nine coaches and the engine of Nagpur-Mumbai Duronto Express derailed near Asangaon in Maharashtra's Thane district around 6:40 am today. No casualties or injuries were reported. The derailment occurred due to a landslide.

The Met predicts heavy rain will continue for the next 48 hours with heavy to very heavy rain predicted for at least the next 24 hours in Mumbai and its suburbs.


Image: The flooded corridors of the KEM civic hospital in Parel. Patients were moved to safety.