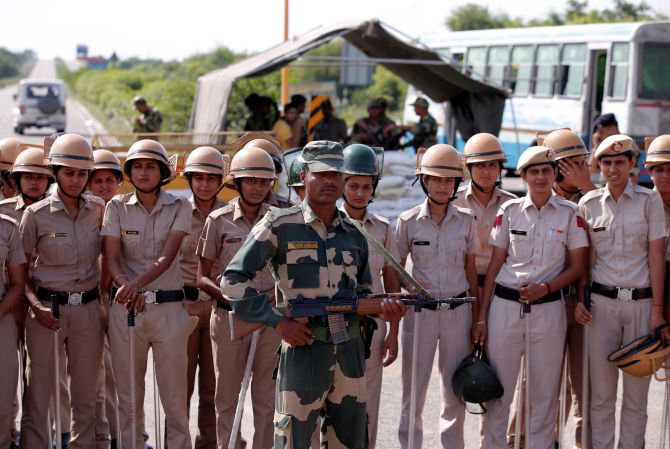 Peace prevailed in Haryana and Punjab today with life gradually returning to normal in violence-hit areas, a day after Dera Sacha Sauda chief Gurmeet Ram Rahim Singh was sentenced to 20 years in jail for raping two of his followers.


Curfew had earlier been lifted from other towns of Haryana where it was imposed including Panchkula and Kaithal. Sirsa town is home to the sprawling Dera headquarters where the sect's followers had gathered in large numbers ahead of Ram Rahim's conviction.


However, most of the followers, who had come from different parts of Punjab, Haryana and elsewhere had left after the administration helped them come out of the premises. Life in sensitive districts of Punjab including Bathinda, Patiala and Moga where there is sizeable presence of Dera followers, was gradually limping back to normal.


However, the two states were still on high alert to prevent any incidence of violence or arson as was witnessed in Panchkula on Friday last after conviction of the Dera chief by the CBI court. Haryana Chief Minister Manohar Lal Khattar has appealed to the people, especially Dera Sacha Sauda followers, to respect the sentence pronounced by the CBI court in the case and help in maintaining peace in the state.


Khattar had said effective arrangements have been made to maintain peace in the state following the decision of the court. Strict action would be taken against any person who attempts to disturb the law and order situation which was reviewed at a high-level meeting held here yesterday, he added.


Punjab Chief Minister Amarinder Singh yesterday met Governor V P Singh Badnore to apprise him of the law and order situation and the steps taken by his government to prevent any breakdown of law and order in the wake of the sentencing of the Dera Sacha Sauda chief. On the continuation of curfew in some sensitive ares of Punjab, the chief minister said the state government would review the situation again today before taking any decision on lifting the curfew imposed in some areas as a precautionary measure.


Curfew has already been lifted from five of the 10 districts where prohibitory orders were imposed. Ban on mobile Internet services in Punjab and Haryana would be lifted today. A decision on opening schools and colleges in the sensitive districts of Punjab, where these were shut for past few days, has been left to district authorities concerned, Amarinder had said yesterday.


IMAGE: Policewomen and a paramilitary soldier stand guard on a closed road leading to Sunariya Jail in Rohtak, yesterday, ahead of the sentencing. Photograph: Adnan Abidi/Reuters
« Back to LIVE